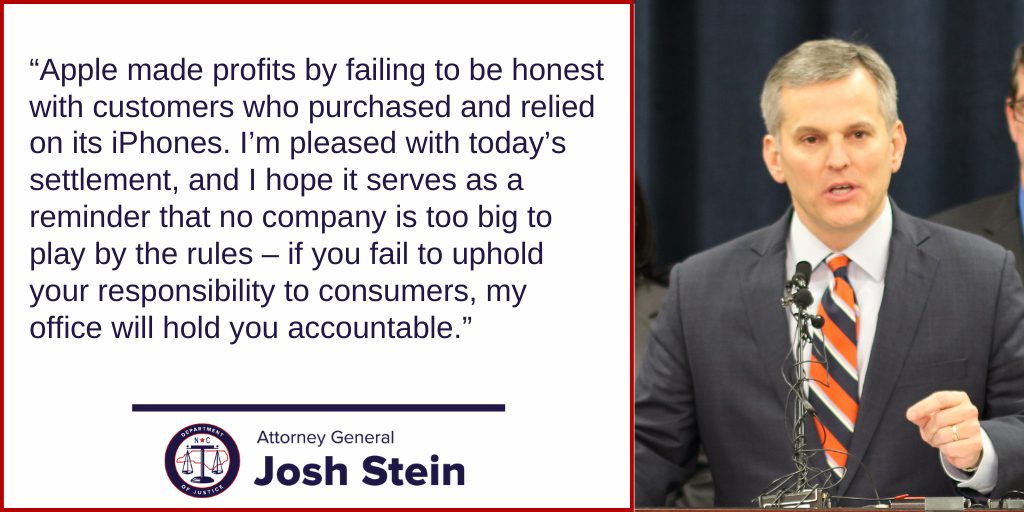 “Apple made profits by failing to be honest with customers who purchased and relied on its iPhones,” said Attorney General Josh Stein. “I’m pleased with today’s settlement, and I hope it serves as a reminder that no company is too big to play by the rules – if you fail to uphold your responsibility to consumers, my office will hold you accountable.”

Based on a multistate investigation, Attorney General Stein and 33 other attorneys general allege that Apple discovered that battery issues were leading to unexpected shutdowns in iPhones. Rather than disclosing these issues or replacing batteries, Apple concealed the issues from consumers. Apple’s concealment ultimately led to a software update in December 2016 that reduced iPhone performance in an effort to keep the phones from unexpectedly shutting down.

The attorneys general allege that Apple’s concealment of the battery issues and decision to throttle the performance of consumers’ iPhones led to Apple profiting from selling additional iPhones to consumers whose phone performance Apple had slowed.

Per the terms of the settlement, Apple must provide truthful information to consumers about iPhone battery health, performance, and power management in various forms on its website, in update installation notes, and in the iPhone user interface itself. Apple recently also entered into a proposed settlement of class action litigation related to the same conduct – under that proposed settlement, Apple will pay out up to $500 million in consumer restitution.

A copy of the complaint is available here.