NEW YORK – New York Attorney General Letitia James today announced the indictment of 78 individuals charged with 355 crimes for their roles in two major drug distribution networks that were based in Central New York and transported cocaine throughout New York state. As alleged in four indictments — unsealed in Onondaga County Court today — this two-year investigation resulted in the seizure of 32 kilograms of cocaine, 117 grams of heroin mixed with fentanyl, more than $490,000, and 15 firearms, including nine ghost guns. In total, the seizures have an estimated street value of up to $2 million.

“Cracking down on illegal drug trafficking and violent crime has been a priority for our office since day one,” said Attorney General James. “As Syracuse continues to experience record high levels of violence, today, we make good on our commitment to protecting our communities by taking these dangerous guns and drugs off our streets. We will ensure that those responsible for endangering our communities are held accountable. I thank our law enforcement partners for their support in seeing this through.”

“The dedication of law enforcement has resulted in the take down of not one, but two cocaine distribution rings supplying deadly drugs into Central New York,” said State Police Superintendent Kevin Bruen. “I applaud the Office of the Attorney General and our other partners for their tireless efforts to target and eliminate these operations. This investigation and disruption of both these drug rings sends a clear message that we have zero tolerance for those who sell deadly, illegal drugs in our communities. We remain committed to working side-by-side with our partners to make our streets safer.”

Today’s takedown was the result of a joint investigation between the Office of the Attorney General’s (OAG) Organized Crime Task Force (OCTF) and the Oneida/Madison County Drug Task Force. The multi-agency investigation — dubbed “Operation Raw Materials” — brought together the resources of more than a dozen local, state, and federal enforcement agencies. The investigation included covert physical surveillance, thousands of hours of electronic surveillance, and multiple search warrants — all aimed at rooting out cocaine dealers operating throughout New York and elsewhere. 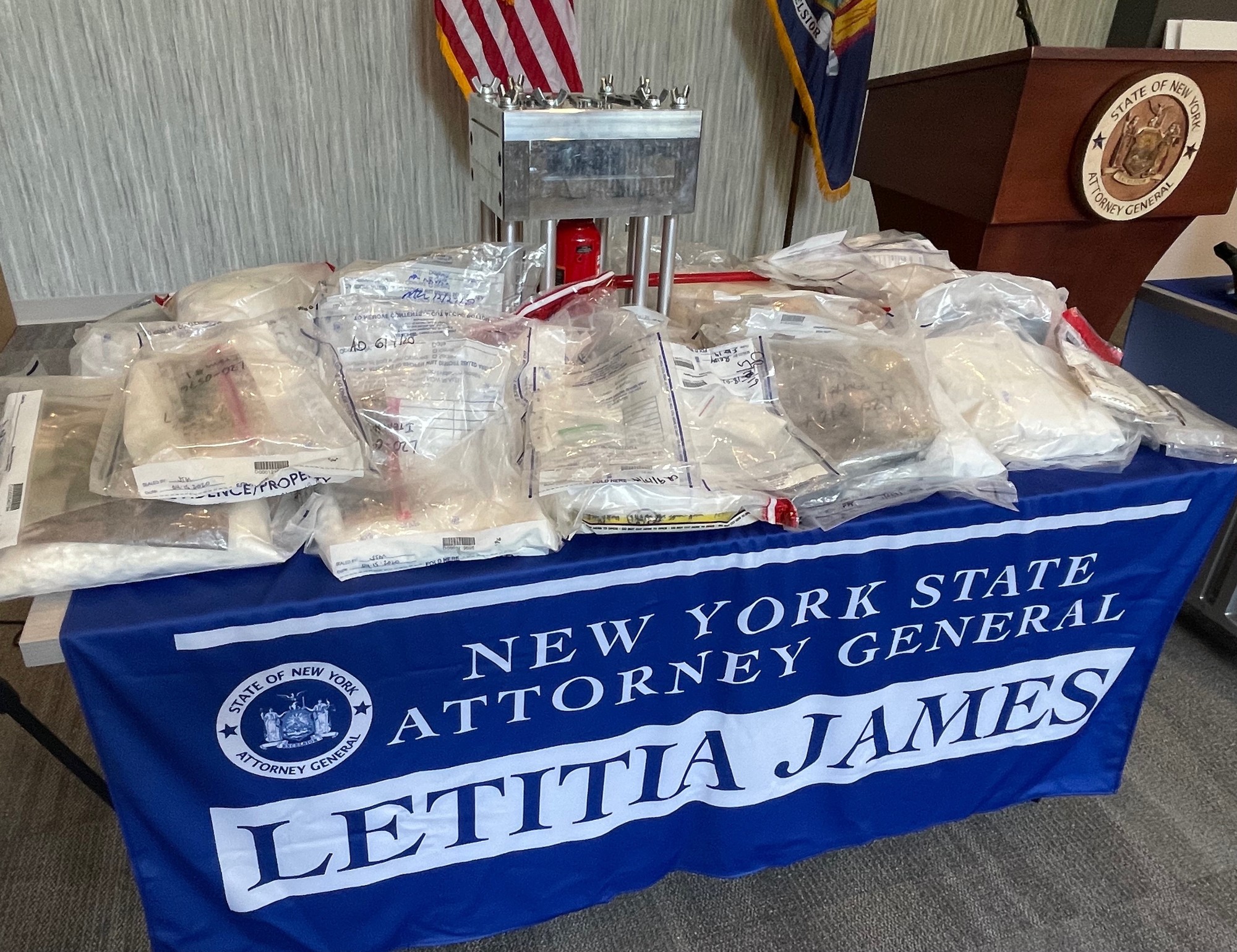 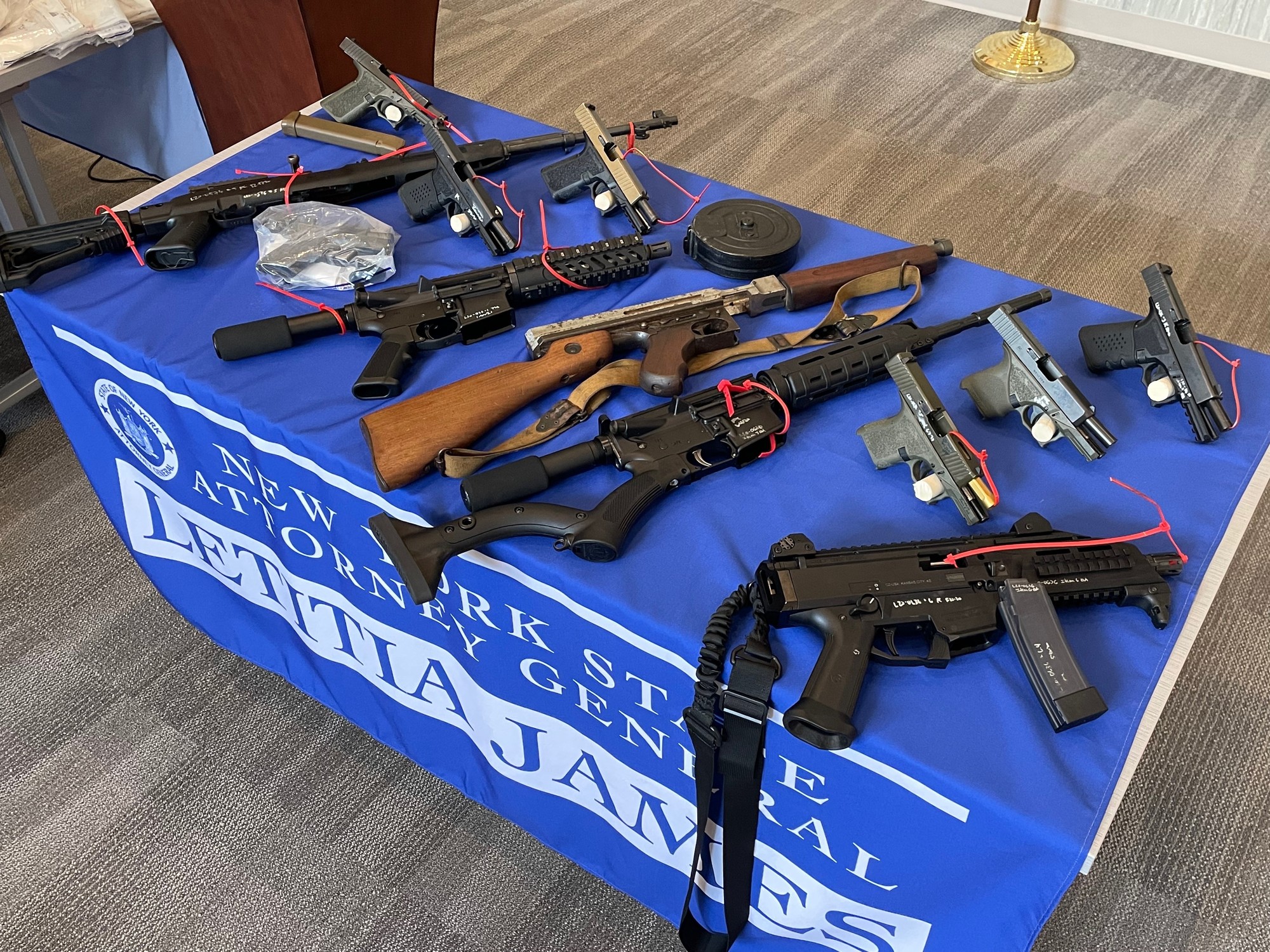 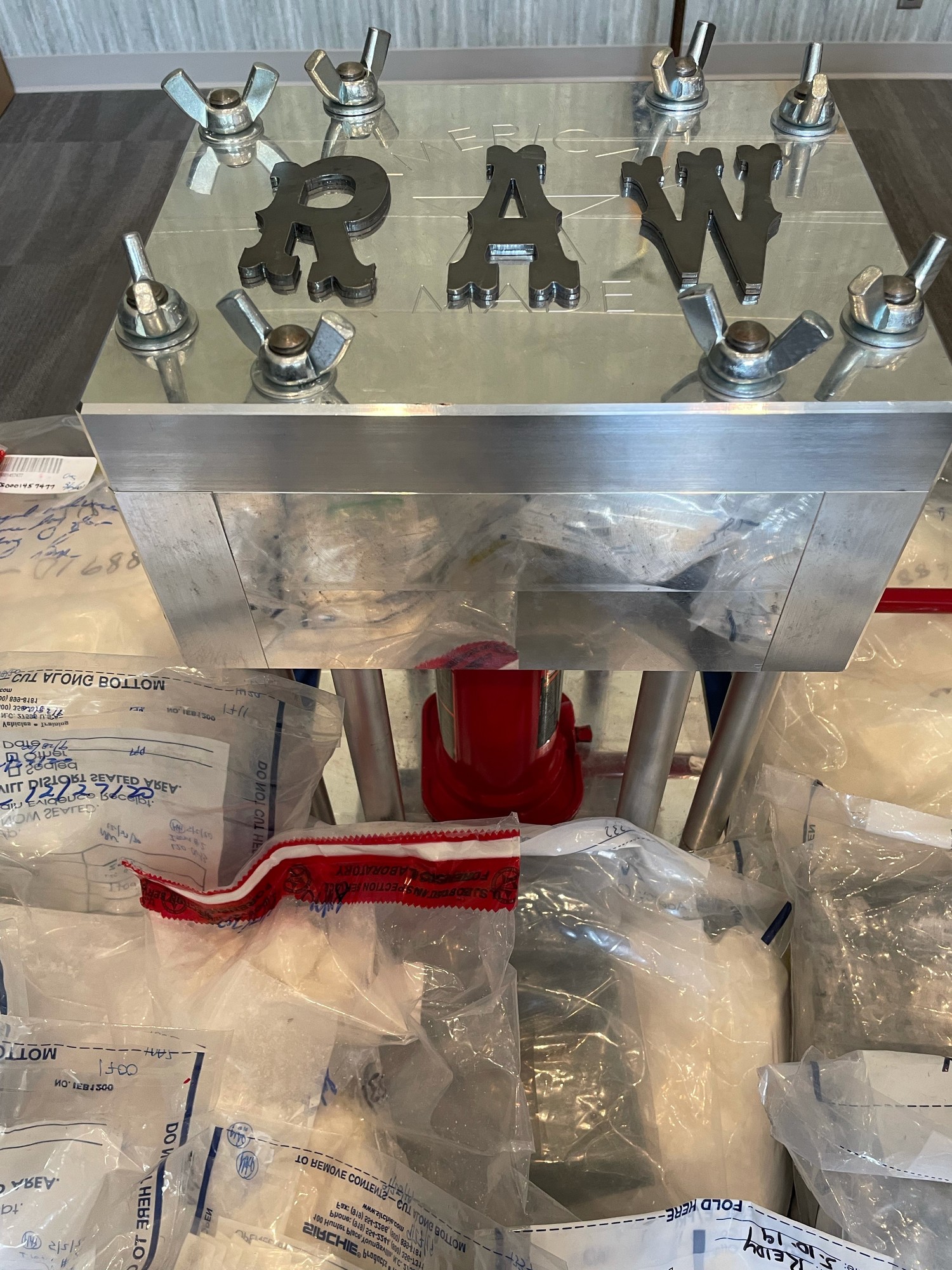 The first indictment outlines the activity of the “Pupello Group” — which was led by Michael Pupello, and charges 25 individuals with 123 counts for their roles in selling narcotics in Onondaga — Madison, and Oswego counties. Pupello employed a vast network of individuals who bought and sold primarily cocaine in the region, and sourced the majority of the drugs from Gregory Procopio, Eduardo Huertas, Jr., and Clinton Jackson. During the course of the wiretapping, the OAG discovered that Jackson was also the source for a separate drug ring in the region, which is outlined in the second indictment. The defendants frequently utilized coded and cryptic terminology in an attempt to disguise their illicit activities, such as referring to ounces of cocaine as “onions” or “zips,” and 3.5-gram narcotics transactions as “balls,” short for “8 balls,” or one-eighth ounce quantities of cocaine. In addition to cocaine, this investigation also resulted in the recovery of MDMA, morphine, and other controlled substances intended for distribution, digital scales used to weigh narcotics, and a machete.

The second indictment outlines the activity of the “Flores Group” — which was led by Hector Flores, a/k/a “Pito” — and charges 50 individuals with 226 counts for their roles in selling narcotics in Onondaga, Oswego, Oneida, Cortland, Westchester, New York, and Bronx counties.

Flores — who is being charged with Operating as a Major Trafficker, which carries a mandatory life sentence in state prison — was a narcotics supplier for numerous Onondaga County drug dealers, including Clinton Jackson, Christian Acevedo, and Brian Fore. In communications intercepted during this investigation, Flores coordinated the shipments of nearly a dozen kilograms of cocaine through the mail from Puerto Rico to addresses in Onondaga County, which were later intercepted by the United States Postal Service (USPS).

The investigation also revealed the challenges that narcotics traffickers faced during the COVID-19 pandemic, including finding secretive meeting places to conduct their transactions, as their common places, such as parking lots or shopping malls, were closed. In addition, traffickers often discussed a significant shortage of cocaine supply and complained about the high price from suppliers due to the “drought,” which resulted in the price of cocaine costing up to 40 percent more than typical illegal market prices. Flores and his network sought to utilize the USPS to get around the pandemic restrictions and get cheaper cocaine from Puerto Rico to their networks in Central New York.

The defendants also built custom trap doors in vehicles they used to transport these drugs and evade law enforcement. In one instance, Felix Jaquez was attempting to deliver drugs to David Fermin when he was pulled over. Investigators found 1.5 kilograms of cocaine inside a mechanical trap door in the glove compartment of the vehicle.

The third indictment is comprised of two defendants: Robert Miguel Lopez and Michael Elias Ventura-Montano. Lopez, of Florida, orchestrated the delivery of three kilograms of cocaine from Florida to New York City to Ventura-Montano. Ventura-Montano then drove the drugs from New York City to Syracuse, where he was intercepted by investigators. The three kilograms of cocaine and $31,000 in cash were recovered by investigators from a custom trap door in the center console of the car.

The fourth indictment is comprised of Jesus Manuel Ruiz Lopez, of Puerto Rico, and Carlos Guzman, of Rochester. Lopez is accused of coordinating the delivery of multiple kilograms of cocaine from Puerto Rico to Rochester, which Guzman then transported to Onondaga County. Investigators seized three kilograms of cocaine, $36,000 in cash, and a loaded .40 caliber Sig Sauer handgun from Guzman.

Today’s takedown marks the latest major drug bust in the OAG’s Suburban and Upstate Response to the Growing Epidemic (SURGE) Initiative, a law enforcement effort that brings together state and local law enforcement to target New York’s growing — and often violent — heroin, opioid, and narcotics trafficking networks. Since launching in 2017, SURGE has taken 722 alleged traffickers off the streets.

The four separate indictments — which were unsealed today — contain 355 counts and charge 78 individuals with crimes in relation to their involvement in the narcotics trafficking operation, including Operating as a Major Trafficker (class A-I felony), Criminal Sale and Criminal Possession of a Controlled Substance (class A, B, and C felonies), and Conspiracy to Commit those Crimes (class B felony).

Those charged in today’s four indictments include:

“I want to thank Attorney General James and local law enforcement today for working to get illegal guns and drugs out of Central New York,” said State Senator Rachel May. “The Madison and Oneida County Sheriff’s departments joined with Attorney General James to play a critical role in this joint effort to make our communities safer. Together with the governor’s announcement yesterday of a multi-pronged effort to combat gun violence, the enactment of state legislation to hold sellers of illegal firearms accountable, and the creation of the new opioid settlement fund to prevent and treat addiction, I hope we will begin to see progress in reducing these tragedies.”

“I want to thank Attorney General Letitia James, her team, and every local officer working to keep drugs, guns, and criminal activity off our streets,” said State Senator John Mannion. “It’s critical that we continue to work together across all levels of government to keep our communities safe.”

“The effort to remove drugs from our streets is essential to allowing our communities to grow safer and be more vibrant,” said State Assemblymember Bill Magnarelli. “I thank Attorney General Letitia James, her office, and the law enforcement agencies on their success in confiscating these illegal drugs.”

“Getting illegal guns off the street and cracking down on drug trafficking is a critical component of efforts to curb gun violence and crime in our community,” said State Assemblymember Al Stirpe. “I want to thank Attorney General Letitia James, as well as state and local law enforcement, for their tireless work on this case.”

“The recent gun violence in Syracuse, and in cities across New York state, has been deeply troubling,” said State Assemblymember Pamela Hunter. “At the end of the legislative session, my colleagues and I passed bills that will make it easier for law enforcement to track down and remove illegal firearms. While many of these bills are not yet enacted, I will continue to be proactive on this issue and will support legislation that addresses the root causes of gun violence in our streets.”

“Keeping our community safe from the perils of drugs, guns, and violence continues to be a top priority of my administration. These efforts are not successful, however, without partners,” said Onondaga County Executive Ryan McMahon. “I am grateful to our local law enforcement and Attorney General James for their relentless efforts to get these drugs and guns off our streets. As Onondaga County continues to see a rise in opioid related overdoses and deaths, we must and will continue to work together to dedicate the necessary resources to help those battling addiction, while bringing to justice those who peddle these dangerous substances.”

“The challenges we face with crime don’t follow municipal boundaries. Successfully getting criminals and guns and drugs off the streets requires a partnership across jurisdictions,” said Syracuse Mayor Ben Walsh. “I thank Attorney General James, the Oneida/Madison County Drug Task Force, the Onondaga County Sheriff’s Department, and the Syracuse Police Department for their outstanding work. The City of Syracuse is safer because of this collaboration.”