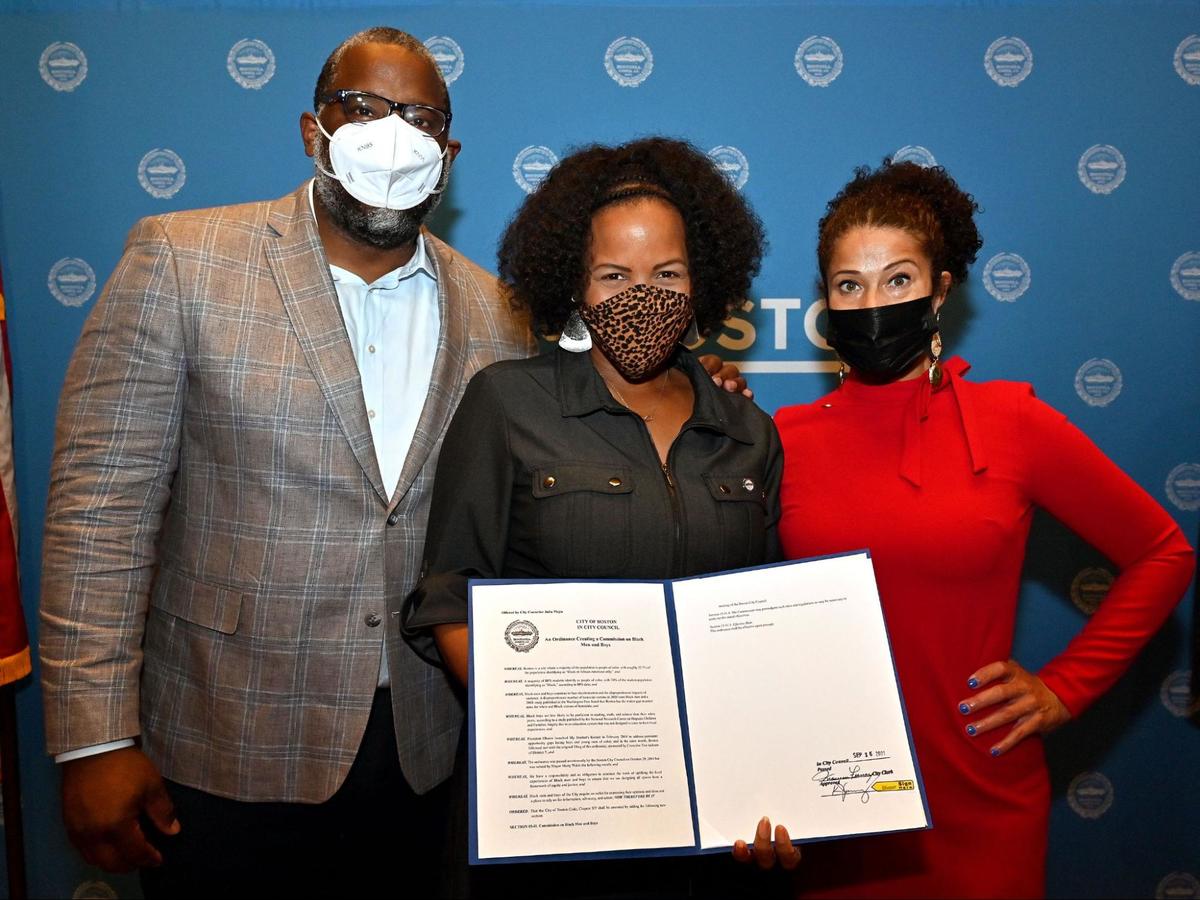 Mayor Kim Janey today joined Boston City Councilor At-Large Julia Mejia and local advocates for an ordinance signing ceremony establishing Boston’s first Black Men and Boys Commission. With its passage, the Commission will be made up of 21 Black men and boys who will advise the Mayor on issues specific to that group. The Commission is charged with addressing concerns related to national origin; sexual orientation and gender identity; mental, physical and sexual health; violence prevention; and employment.

“The Black men gathered for today’s historic signing are proof of the desire for Black communities to lead and be fully present in Boston’s civic and electoral spaces. Black men and boys deserve dedicated advocacy to address health equity, economic opportunity and other disparities in our City,” said Mayor Janey. “As the first Black Mayor of Boston, I know representation matters. It was my honor to sign this ordinance and I want to thank the work of Councilor Mejia, former-Councilor Jackson, and everyone who helped move this initiative forward.”

“We have the opportunity to make history. This ordinance matters because Black men and boys matter,” said Councilor Mejia on Wednesday. “We have an obligation to create space to let people step into their power and let the people closest to the pain be closest to the power. This commission will create pathways for our city to address some of the most pressing inequities that impact Black men and boys in Boston, from violence to mental wellness to sexual health and more.”

A commission dedicated to the issues of Black men and boys was first proposed in 2014 by former District 7 Boston City Councilor, Tito Jackson, who was recognized by Mayor Janey at today’s signing. The new ordinance sponsored by Councilor Mejia passed the Boston City Council on September 15, 2021. With the Mayor’s signature today, the Commission has been formally established.

“I applaud Mayor Janey for her leadership in making the Commission on Black Men and Boys a reality,” said Jackson. “I proposed this legislation in 2014 because of the profound opportunity to uplift Black men and boys and create a platform for community leadership, advocacy and accountability.”

Once members are appointed, the Black Men and Boys Commission will work closely with the City’s the Equity and Inclusion Cabinet, Boston Public Schools and the Human Rights Commission.

“We look forward to working closely with the Black Men and Boys Commission to ensure the City is proactively looking at policies and programs to eliminate the inequities in access and disparate outcomes that they face in our City,” said Celina Barrios-Millner, Chief of Equity and Inclusion.