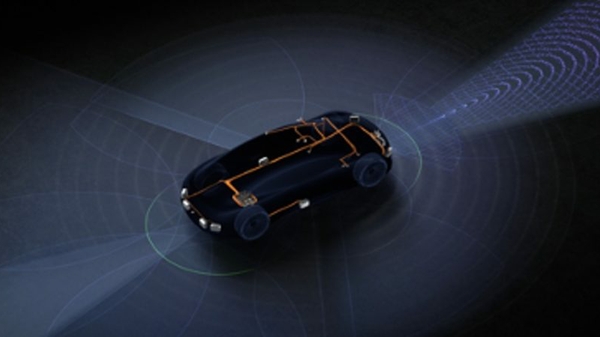 NVIDIA DRIVE Hyperion 8 is a computer architecture and sensor set for full self-driving systems. This latest generation technology is designed for the highest levels of functional safety and cybersecurity, and is supported by sensors from a wide range of leading suppliers including Continental, Hella, Luminar, Sony and Valeo. DRIVE Hyperion is available today for 2024 vehicle models, NVIDIA founder and CEO Jensen Huang announced at GTC.

The production platform is designed to be open and modular, so customers can easily use what they need — from core compute and middleware all the way to NCAP, level 3 driving, level 4 parking and AI cockpit capabilities.

During the GTC keynote, Huang showed a DRIVE Hyperion 8 vehicle drive autonomously from the NVIDIA headquarters in Santa Clara, Calif., to Rivermark Plaza in San Jose.

DRIVE Hyperion is also scalable, with the current standard DRIVE Orin platform designed to be upgradeable with NVIDIA DRIVE Atlan and DriveWorks APIs that are compatible across generations.

With a functionally safe AI compute platform at its core, DRIVE Hyperion provides a secure base for autonomous vehicle development.

By including a complete sensor setup on top of centralized compute and AI software, DRIVE Hyperion provides everything needed to validate an intelligent vehicle’s hardware on the road.

Its sensor suite encompasses 12 cameras, nine radars, 12 ultrasonics and one front-facing lidar sensor. And with the adoption of best-in-class sensor suppliers coupled with sensor abstraction tools, autonomous vehicle manufacturers can customize the platform to their individual self-driving solutions.

This open, flexible ecosystem ensures developers can test and validate their technology on the exact hardware that will be on the vehicle.

“NVIDIA has led the modern compute revolution, and the industry sees them as doing the same with autonomous driving,” said Austin Russell, Founder and CEO of Luminar. “The common thread between our two companies is that our technologies are becoming the de facto solution for major automakers to enable next-generation safety and autonomy. By taking advantage of our respective strengths, automakers have access to the most advanced autonomous vehicle development platform.”

“NVIDIA DRIVE Hyperion is a complete platform for developing autonomous vehicles, which is why Sony has integrated its sensors to give our customers the most effective transition from prototype to production vehicles,” said Marius Evensen, Head of Automotive Marketing at Sony.

DRIVE Hyperion is open and can accelerate the AV industry’s time to market by giving manufacturers the ability to leverage NVIDIA’s own development work. It includes all the tools NVIDIA engineers use to record, capture and process all the data from these sensors in real time.

And this entire toolset is synchronized and calibrated precisely for 4D data collection, giving developers valuable time back in deploying safe and robust autonomous vehicles. DRIVE Hyperion is the ideal platform for anyone developing autonomous vehicles.

Catch up on the full GTC keynote: