In his 2022 State of the State Address, Governor Ducey said:

“A few years ago we got together and prioritized expansion of the I-17. Then, thanks to the leadership of Senator T.J. Shope and Governor Lewis of the Gila River Indian Community, we paved the way for a wider I-10, to improve movement and commerce between Tucson and Phoenix. But that project is still scheduled several years out from now, and 94 visits as Governor to Southern Arizona will remind you how important this issue is. So, let’s finish the job. Our budget will invest more dollars to get the I-10 completion leap-frogged to the front of the priority list, ahead of schedule, connecting our entire state, north to south.”

The Governor expressed the need to “finish the job” and invest more dollars to complete the I-10 project that would expand the highway from two lanes to three in both directions between Phoenix and Tucson. This investment will further position the State to receive federal monies to fully fund the aforementioned I-10 expansion between Phoenix and Casa Grande.

This historic investment in the vital transportation and commerce corridor that connects Phoenix and Tucson will: 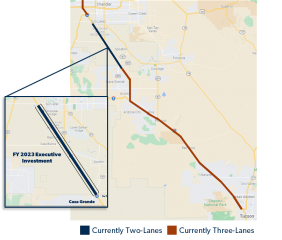 “The Governor’s investment into the expansion of I-10 is the leadership that is needed to lock in Arizona’s future as an economic powerhouse and continue to improve the quality of life for all Arizonans,” said John Halikowski, director of the Arizona Department of Transportation.

In February 2021, Governor Ducey announced $230 million in new transportation infrastructure investments including closing the funding gap to replace the Gila River Bridge on I-10, widening U.S. Route 93 north of Wickenburg, adding capacity to I-17 north of metro Phoenix and improving more than 600 highway lane-miles across the state.

In 2019, the Loop 202 South Mountain Freeway in Phoenix opened, marking the culmination of the largest single freeway project in state history. The project finished three years early and with $100 million in savings through an innovative partnership.

Arizona January 20, 2022 • Comments off
Investment will help ‘finish the job’ for the key commerce corridor  PHOENIX – A major bottleneck for commuters and commerce between…

Arizona January 20, 2022 • Comments off
PHOENIX – Governor Doug Ducey is suing the federal government over the Biden administration’s attempt to take away funding for critical…

Gov. Ducey on Fox News: &quot;Arizona is Filing a Lawsuit Against the Biden Administration.&quot;

Arizona January 18, 2022 • Comments off
PHOENIX – The Governor’s Office today announced the promotion of Katie Ratlief, who will now serve as Deputy Chief of…

Arizona January 18, 2022 • Comments off
‘Investment in our state parks system is an investment in rural Arizona’ PHOENIX – Arizona could soon make the largest single…

Investing in Infrastructure
One of the most anticipated events of the legislative session is the governor’s State of the State address. This week, the General Assembly gathered in a joint session to hear the governor present his legislative priorities

January 21, 2022   |   Ottawa, ON   |   Public Health Agency of Canada
The COVID-19 pandemic continues to create stress and anxiety for many Canadians, particularly those who do not have ready access to their regular support networks. # # # # # # #

LACEY, Wash.– Washington residents who applied for assistance from FEMA after sustaining damage from floods and mudslides in November will receive a letter from the agency in the mail or via email.

The letter will explain your application status and