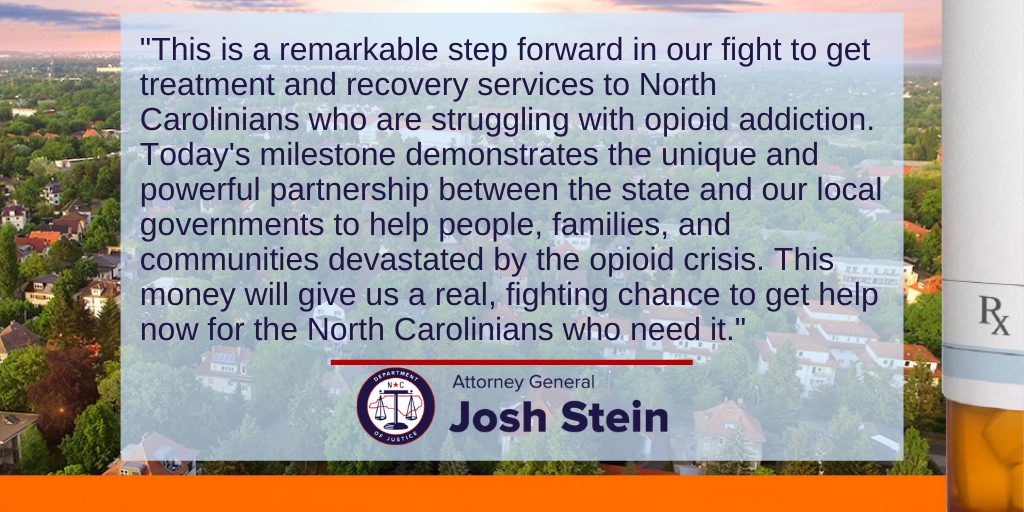 (RALEIGH) Attorney General Josh Stein, the North Carolina Association of County Commissioners, and the North Carolina League of Municipalities today announced a major milestone – all 100 North Carolina counties and 45 largest municipalities have signed on to the $26 billion multistate agreement with the nation’s three major pharmaceutical distributors – Cardinal, McKesson, and AmerisourceBergen – and Johnson & Johnson over the companies’ role in creating and fueling the nationwide opioid crisis. Fifty-one states and territories have signed onto this agreement since it was announced in July. As a result of these local governments signing on, North Carolina now stands to receive its full share of nearly $750 million when the deal is finalized.

“This is a remarkable step forward in our fight to get treatment and recovery services to North Carolinians who are struggling with opioid addiction,” said Attorney General Josh Stein. “Today’s milestone demonstrates the unique and powerful partnership between the state and our local governments to help people, families, and communities devastated by the opioid crisis. This money will give us a real, fighting chance to get help now for the North Carolinians who need it.”

“We are grateful for the collaborative work between counties, cities and the state to achieve this result and proud that this agreement represents a unified front among North Carolina’s 100 counties, knowing that county leaders will put the resulting funds to work in healing their communities from the opioid epidemic,” said North Carolina Association of County Commissioners Executive Director Kevin Leonard.

“The resources provided by these settlement funds will be critical in addressing the opioid crisis and repairing the lives damaged by opioid addiction,” said North Carolina League of Municipalities Executive Director Rose Vaughn Williams. “Local officials from across the state have been working diligently to address the many challenges created by this crisis, and cities and towns have again shown their diligence by signing on to this agreement so that North Carolina can see the best outcomes possible. By working together, we are working toward a better future.”

Additional support to encourage North Carolina governments to sign on was provided by:

More on the agreement with local governments in North Carolina is available here.

FOOTAGE AVAILABLE: Governor Cooper Tours a Vaccine and Testing Site in Kinston, Encourages North Carolinians to Get Their Lifesaving Shots

For media and investors only
Issued: London, UK and Paris, France

JEFFERSON CITY — This Date in Missouri Senate History reviews Jan. 18, 1871, beginning of the third week of the Regular Session of the 26th
Source link # # # # #