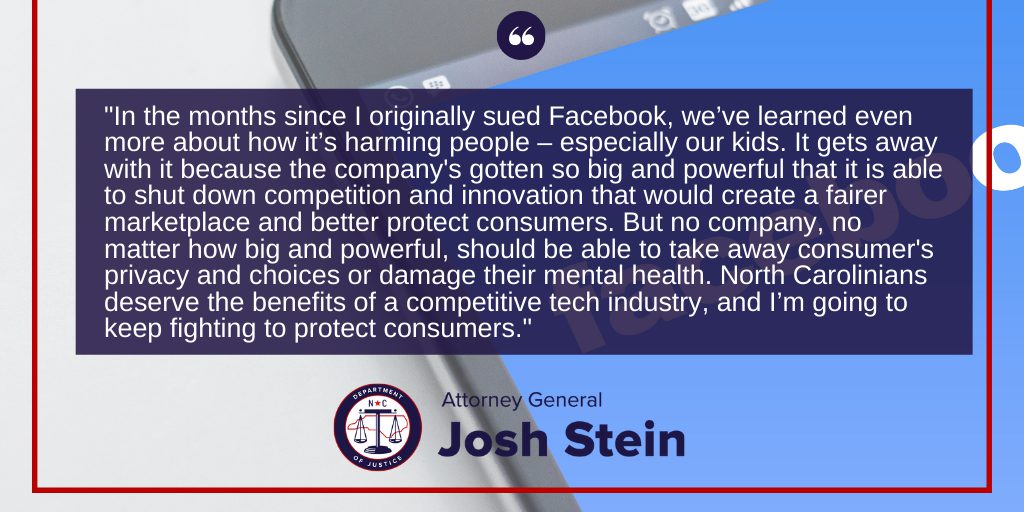 “In the months since I originally sued Facebook, we’ve learned even more about how it’s harming people – especially our kids,” said Attorney General Josh Stein. “It gets away with it because the company’s gotten so big and powerful that it is able to shut down competition and innovation that would create a fairer marketplace and better protect consumers. But no company, no matter how big and powerful, should be able to take away consumer’s privacy and choices or damage their mental health. North Carolinians deserve the benefits of a competitive tech industry, and I’m going to keep fighting to protect consumers.”

Over the last decade, the office alleges, Facebook illegally acquired competitors in a predatory manner and cut or conditioned services to smaller threats — depriving users of the benefits of competition and reducing privacy protections and services along the way — all in an effort to boost its bottom line through increased advertising revenue. In December 2020, the bipartisan coalition of attorneys general filed a lawsuit in the U.S. District Court for the District of Columbia to stop Facebook’s anticompetitive conduct. The company filed a motion to dismiss, which was granted by the court last summer. Today’s appeal to the U.S. Court of Appeals for the D.C. Circuit asks the court to allow the coalition of attorneys general to move forward with their suit.

Separately, the Federal Trade Commission (FTC) also filed an amended complaint against Facebook in the U.S. District Court for the District of Columbia. In a ruling earlier this week, the court denied Facebook’s motion to dismiss the FTC’s complaint, allowing the FTC to proceed.

North Carolina January 19, 2022 • Comments off
Raleigh Jan 19, 2022 Governor Roy Cooper has signed a state of emergency in advance of the second winter storm…

FOOTAGE AVAILABLE: Governor Cooper Tours a Vaccine and Testing Site in Kinston, Encourages North Carolinians to Get Their Lifesaving Shots

For media and investors only
Issued: London, UK
Approval marks a significant step in GSK’s global efforts to help patients with anaemia due to chronic kidney disease (CKD).
GlaxoSmithKline plc (LSE/NYSE: GSK) today announced the approval of a Japanese

January 19, 2022—Vancouver—Canada is responding as quickly as possible to the humanitarian situation in Afghanistan by helping bring Afghan citizens and their families safely to their new home.

We all have seen the “Help Wanted” signs, and each of us has heard from employers who are struggling because of a lack of not only qualified employees, but anyone willing to come in and work. It is the same in state government. # # # # #