Boston Artists-in-Residence is a civic partnership between socially-engaged artists and City departments.

Mayor Michelle Wu and the Mayor’s Office of Arts and Culture, in collaboration with the Boston Parks and Recreation Department, Boston Planning and Development Agency (BPDA), Environment Department, and the Boston Transportation Department (BTD), today announced six artists have been selected for the next cohort of Boston Artists-in-Residence (Boston AIR). The City is also awarding funding to five former AIRs who have continued projects beyond their residency. 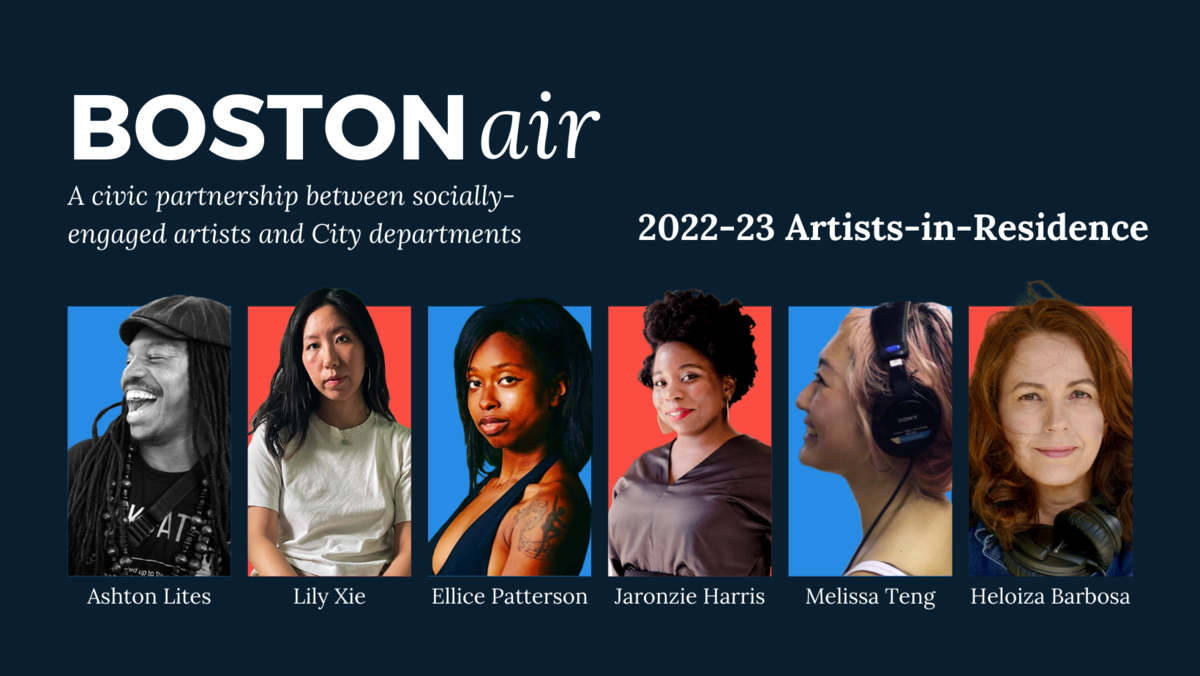 “The Boston Artists-in-Residents program is a creative opportunity to empower Boston artists to rethink how we can deliver city services for our residents,” said Mayor Michelle Wu. “I look forward to fostering these collaborations and enhancing the city’s civic and artistic partnerships.”

“We’ve seen how impactful it has been to have artists working collaboratively with City departments to make positive changes to City systems, policies, and processes,” said Chief of Arts & Culture Kara Elliott-Ortega. “This year, we’re excited to not only invest in a new cohort of artists representing a wide range of artistic backgrounds and experiences, but also help artists expand the projects they started with us.”

Boston AIR is the City of Boston’s artist residency program where a group of artists spend 15 months collaborating with a parallel group of City of Boston partners to co-design projects that imagine and test new approaches to challenges the City faces. Past projects include a taiko drummer who worked with older adults in Grove Hall to advocate for a safer crosswalk in front of their community center, a poet who created an oral history listening booth that traveled to various libraries and spaces throughout the city, and an artist who developed a Cultural Emergency Response framework that was integrated into the Office of Emergency Management’s work.

The Mayor’s Office of Arts and Culture released a Call to Artists for the fifth cohort of Boston AIR in January. A committee of local arts leaders and Boston Artists-in-Residence mentors reviewed all submissions, and the top applicants were invited to attend interviews. The following artists and City partners were selected to make up a cohort that includes a mix of artistic disciplines and experiences:

“As Director of Research, being a member of the Artists-in-Residence program is a special opportunity to explore a new language and vocabulary for expressing the economic and social conditions of the city’s residents, especially those who have been most impacted by economic inequality and social exclusion,” said City partner Alvaro Lima.

Five of the artists will work with their City partners to co-design projects that consider the needs of Boston’s diverse communities, examine City policies with a lens of resilience and racial equity, help residents understand how local government impacts them, support a collaborative creation of City policies and processes, and provide a model for civic practice that departments can use going forward. Melissa Teng will be working with the Mayor’s Office of Arts and Culture to conduct participatory action research during the program.

“This program aligns with a direction that I want to grow towards, working hand in hand with departments within City Hall to creatively cultivate change that will impact communities who need it the most,” said Boston Artist-in-Residence Ashton Lites. “I’m excited to learn, experience the backend of policy-driven City work, and to bring my grassroots experience to the table to create something great with other creative artists and City departments. Lastly, I’m excited for all the people who will benefit from these beautiful collaborations for years to come.”

Each Artist-in-Residence receives a $37,000 artist stipend and up to $10,000 for project materials. In addition to the projects that this new cohort will codesign and implement, the City is also allocating $30,000 in funding to support the following former Artists-in-Residence as they continue projects that stemmed from their residencies:

Since the inception of Boston AIR in 2015, a total of 25 diverse artists have worked with over a dozen City departments and agencies. The projects created by artists and their City partners have taken various forms, but have all focused on supporting the efforts of City departments and better serving Boston’s communities.

To learn more about the Boston AIR program and this year’s cohort, visit boston.gov/boston-air.

More Than $800,000 Awarded to 120 Local Artists and Creative Workers Through the Opportunity Fund