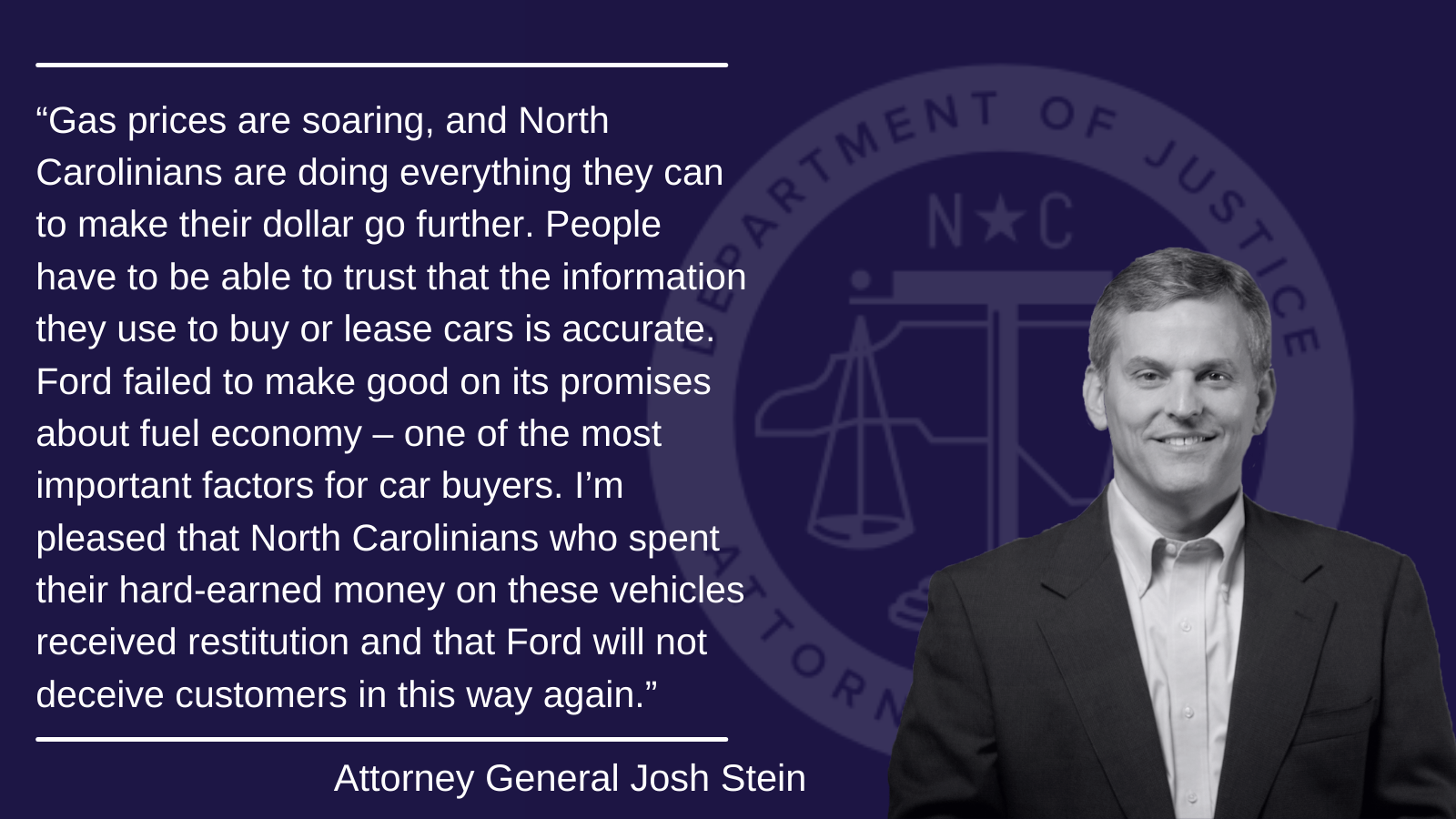 (RALEIGH) Attorney General Josh Stein today announced that North Carolina will receive $380,952.61 as part of a $19.2 million multistate settlement with Ford Motor Company over claims that Ford falsely advertised the real-world fuel economy of 2013–2014 C-Max hybrids and the payload capacity of 2011–2014 Super Duty pickup trucks. This settlement corrects Ford’s deceptive advertising practices and helps ensure that Ford will not make false or misleading advertising claims about the fuel economy of its vehicles. North Carolinians owned or leased 1,197 of the impacted vehicles and Ford has already paid restitution to these customers.

“Gas prices are soaring, and North Carolinians are doing everything they can to make their dollar go further,” said Attorney General Josh Stein. “People have to be able to trust that the information they use to buy or lease cars is accurate. Ford failed to make good on its promises about fuel economy – one of the most important factors for car buyers. I’m pleased that North Carolinians who spent their hard-earned money on these vehicles received restitution and that Ford will not deceive customers in this way again.”

A multistate investigation revealed that Ford made several misleading representations about 2013–2014 C-Max hybrids including:

At one point, Ford ran a series of advertisements called the “Hybrid Games,” which were narrated like an Olympic sporting event and depicted the C-Max outperforming the Prius. The attorneys general allege that the videos deceptively reflected that C-Max vehicles offered superior real-world fuel economy and driving performance. The C-Max hybrid was initially promoted as 47 mpg in the city and highway. Ford had to lower the vehicle’s fuel economy rating once in 2013 and again in 2014, to eventually 42 mpg/city, 37 mpg/highway, and 40 mpg/city-highway mixed; impacting the MY 2013 (twice) and MY 2014 C-Max hybrid.

The attorneys general also investigated Ford’s misleading “Best-in-Class” payload claims on its 2011–2014 Super Duty pick-up trucks, a line that caters to consumers hauling and towing heavy loads and includes the F-250, F-350, and F-450 models. The attorneys general allege that Ford’s methodology to calculate maximum payload capacity for advertising purposes was based on a hypothetical truck configuration that omitted standard items such as the spare wheel, tire and jack, center flow console (replacing it with a mini console), and radio. Although advertised as available to all customers, only fleet customers could order the special configuration.

Attorney General Stein is joined in this settlement by 40 other attorneys general.

A copy of the settlement is available here.