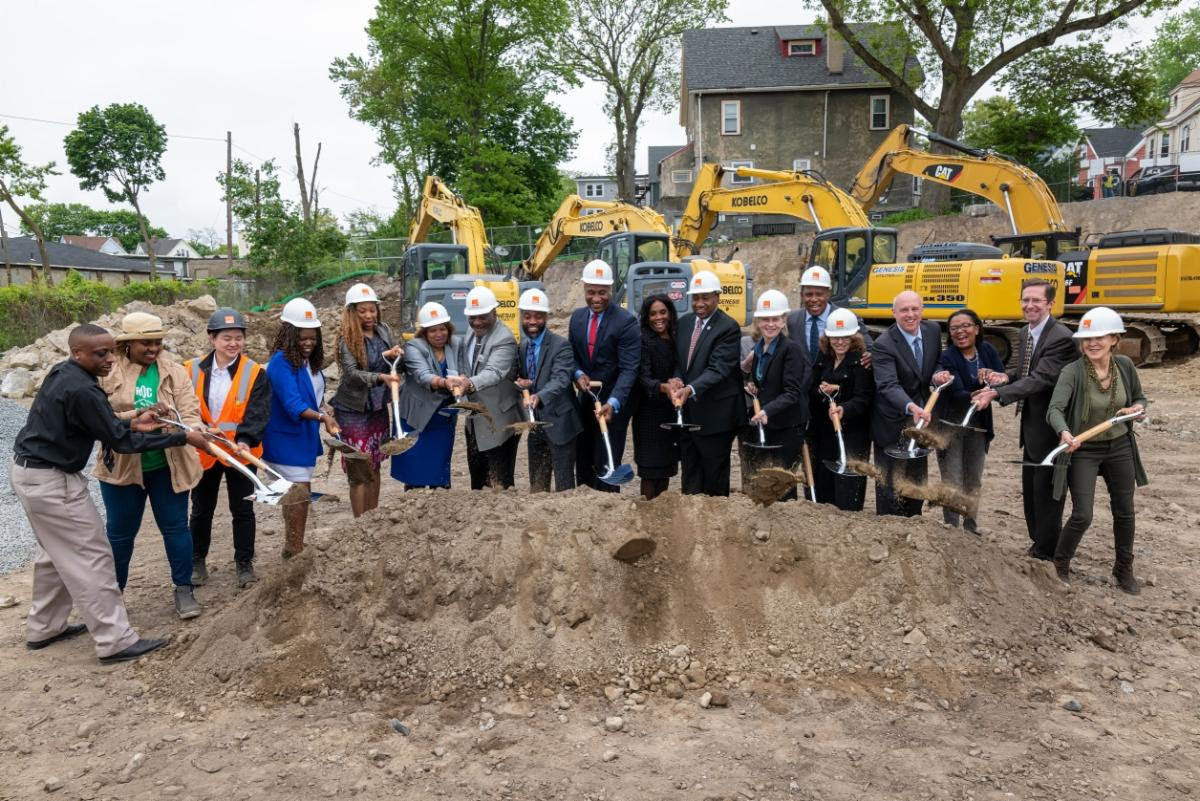 On May 20th, the City of Boston celebrated the groundbreaking of Morton Station Village, a new mixed-income housing development in Mattapan. When completed in the Fall of 2023, Morton Station Village will add 28 rentals and 12 affordable homeownership units,  a total of 40 units that will serve a wide range of households with incomes from 30% of Area Median Income (AMI) to 100% of AMI.

Morton Station Village is an easy walk of less than five minutes to the Blue Hill Avenue commuter rail stop. Along with the usual amenities, the four story building will have a large community space on the first floor for programming for residents, and a courtyard with an 8,000 square foot serenity garden to honor the memory of the late Steven P. Odom.

Formerly the site of a Boston Police station, In 2018, the City of Boston designated the Morton Station Village development team of the Planning Office for Urban Affairs (POUA) and Caribbean Integration Community Development (CICD) as the developers of the 34,000 square foot site. After a collaborative process between the community, the Commonwealth of Massachusetts ,and the City of Boston, the property will be transformed into much needed housing that meets the requirements of the City of Boston’s Green Affordable Housing Program. Morton Station Village will include energy-efficient heating and cooling systems, as well as Energy Star-rated appliances, and will have environmentally-friendly design features throughout.

June marks Pride Month, which commemorates the Stonewall riots that occurred at the end of June 1969. As a result, many pride events are held during this month to recognize the impact LGBTQ people have had in the world. There are a number of events happening in the City throughout the month. Some of them can be found on this event page.

Every June we honor and celebrate America’s Caribbean-American population. The goal is to recognize the contributions of Caribbean immigrants to the United States of America from founding father Alexander Hamilton to US Secretary of State General Colin Powell and Hon. Shirley Chisholm, the first Black woman to run as candidate for the President of the United States of America. 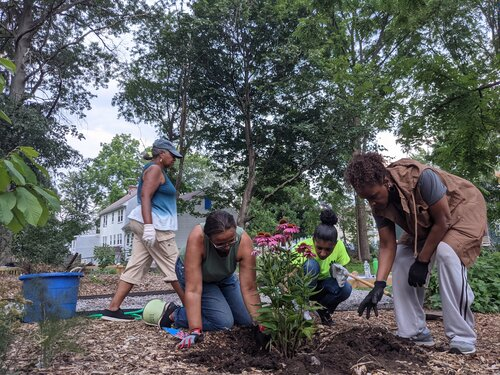 The Edgewater Neighborhood Association and Boston Food Forest Coalition held a welcoming event celebrating Phase I of the Edgewater Food Forest at River Street, located behind 640 River Street in Mattapan.  The food forest is being created by the neighborhood association in what had been an empty field. It was an exciting event with planting, a tour, and a brass & wind performance from a local church’s youth orchestra. The site has walnut trees and a processing station, fruit trees and bushes, a rain catchment system, and a gazebo for community events. The food forest was made possible in part by a $125,000 investment from the City.

The Mayor’s Office of Housing hosted the first Rent Stabilization Public Listening Session on the evening of Tuesday, May 24. The session was attended by over 300 individuals and provided the community the opportunity to give feedback and comments on potential rent stabilization measures the City may enact.

There will be four more listening sessions held over the next couple of months. All sessions will be open to the public. The next listening session will be held on Saturday, June 25, from 10:00 – 11:30 AM and will be tenant-focused.

Additional sessions focused on property owners, labor unions and workforce members, and tenants will be held throughout the month of July.

Registration information will be posted on the Rent Stabilization webpage.

The Mayor’s Office of Housing announced the tentative designation for two parcels in Roxbury. United Neighbors of Lower Roxbury, Incorporated (UNLR) has been designated to renovate the Melnea Cass Community Garden, preserve open space and create a new plaza in Roxbury on two City of Boston-owned parcels on Melnea Cass Boulevard in Lower Roxbury. UNLR  has been central in preserving this open space.

GrowBoston: Office of Urban Agriculture issued a Request for Proposals (RFP) in November 2021, for each of the two sites, seeking to preserve the parcels permanently as open space and a new plaza. The City of Boston facilitated an inclusive process, which included multiple community meetings with residents in the neighborhood, and created the RFP for the land.  During the process, the preservation of these open spaces was overwhelmingly supported by the Roxbury community. In addition, there was strong support from the community for the proposals to develop the land.

The combined 26,906 square feet Melnea Cass parcel was originally owned by the State, and had been vacant for decades. While in the care and keeping of the City of Boston for the past eight years, the parcels have been in use as a community garden, and cared for by the UNLR and gardeners who live in the neighborhood.  Those gardeners, along with other community members, have been involved in the visioning and planning for the tentative designation, including the renovation of the garden and the creation of a new plaza. 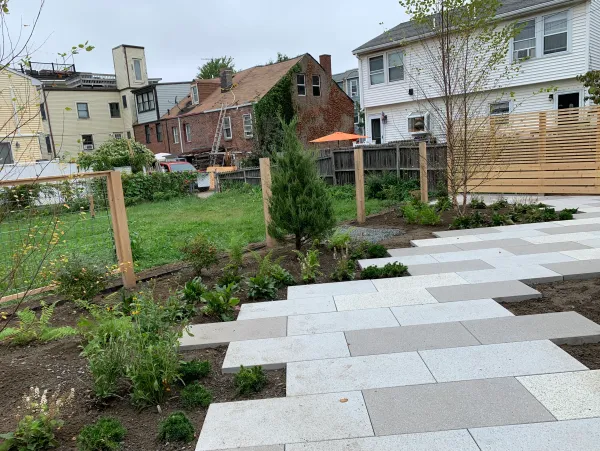 The new park is located on 603R East Second Street in South Boston and had been vacant for more than 30 years. It has functioned as a passive open space that Barnard Place residents have maintained and advocated for it to be officially made into a permanent green space. In April 2019, the residents established a nonprofit organization to secure the deed to the land from the City of Boston with the purpose of retaining it as an open green space to share with the community. The City conveyed the land to the Barnard Place Park Corporation in 2020.

The Barnard Place Park Corporation created the new Barnard Place Park which is a beautiful green open space with trees, shrubs, herbs, a butterfly and bee garden to feed pollinators, bistro-style seating and a bocce court to honor the history of bocce that was played by immigrants on this land decades ago. The park also includes memorial benches in memory of longstanding Barnard Place residents Arta Fritch and Boston Firefighter Scott Salman.

The City’s Partners with Nonprofits (PNP) program, awarded 17 human service nonprofit organizations from around Boston a total of $567,344 in grant funding for public facility upgrades and on-site physical improvements. This year’s awards will fund capital improvements for social service organizations, providers to homeless individuals and families, youth and recreation centers, the YMCA, several Boys and Girls Clubs neighborhood branches, and other nonprofit organizations. This funding comes at a critical time for organizations providing services to unhoused residents, and will bolster their ability to care for an array of residents as the City recovers from the COVID-19 pandemic.

Since 1995, the Partners with Nonprofits program, operated by the Mayor’s Office of Housing, has awarded more than $11.8 million in grants to neighborhood nonprofit organizations.  The program provides funding up to $40,000 for capital improvements, such as handicap accessibility upgrades, building repairs, or other infrastructure renovations, to neighborhood-based nonprofit organizations through a competitive Request for Proposals process. Grants are made possible by the City’s Community Development Block Grant (CDBG) funding from the U.S. Department of Housing and Urban Development (HUD).

The following nonprofit groups were awarded Partners with Nonprofits grants in this round:

An individual in Connecticut was contacted through Facebook Messenger with a link to a fake offer for help in applying for a Community Development Block Grant. The resident started to provide this person with some of their personal information believing that it was a legitimate program before realizing it was a scam. This type of scam has been seen in other regions of the country, and we are warning our partners to be on the lookout here.

Please be aware – HUD never contacts grantees asking for up-front costs or fees to disseminate grant funding. HUD does not send grant announcement notifications via informal channels such as a personal email to an individual. If you suspect that communication you have received could be a scam, contact your local field office to verify the information before responding or clicking on any links. Review the other scams related to coronavirus reported by the Consumer Financial Protection Bureau (CFPB).

Unfortunately, seniors in Boston are also once again being targeted by home repair and improvement scams. Working with our partners in AgeStrong, we’ve been made aware of roof, window, and driveway sales persons going door to door and soliciting business. These “salespeople” may be presenting themselves as City of Boston employees. Even more concerning, the Boston Home Center recently intervened to assist a 93 year old Hyde Park widow who mistakenly signed a contract to replace her heat and AC unit for significantly more money than she should have been charged, believing that she was working with the City of Boston. This extortionate loan could have ultimately resulted in the homeowner ending up in foreclosure, something that would never happen if she was actually working with the Boston Home Center or any of its approved vendors.

Please help us relay the following messages to the public: City workers do not solicit business from residents by going door to door. The City has several programs that assist income qualified seniors to repair their homes, using forgivable loans that are repaid only when the home is sold or refinanced.

For more information on the programs, please visit the Boston Home Center website. If you suspect that you have been the victim of a scam, please contact the Boston Police.