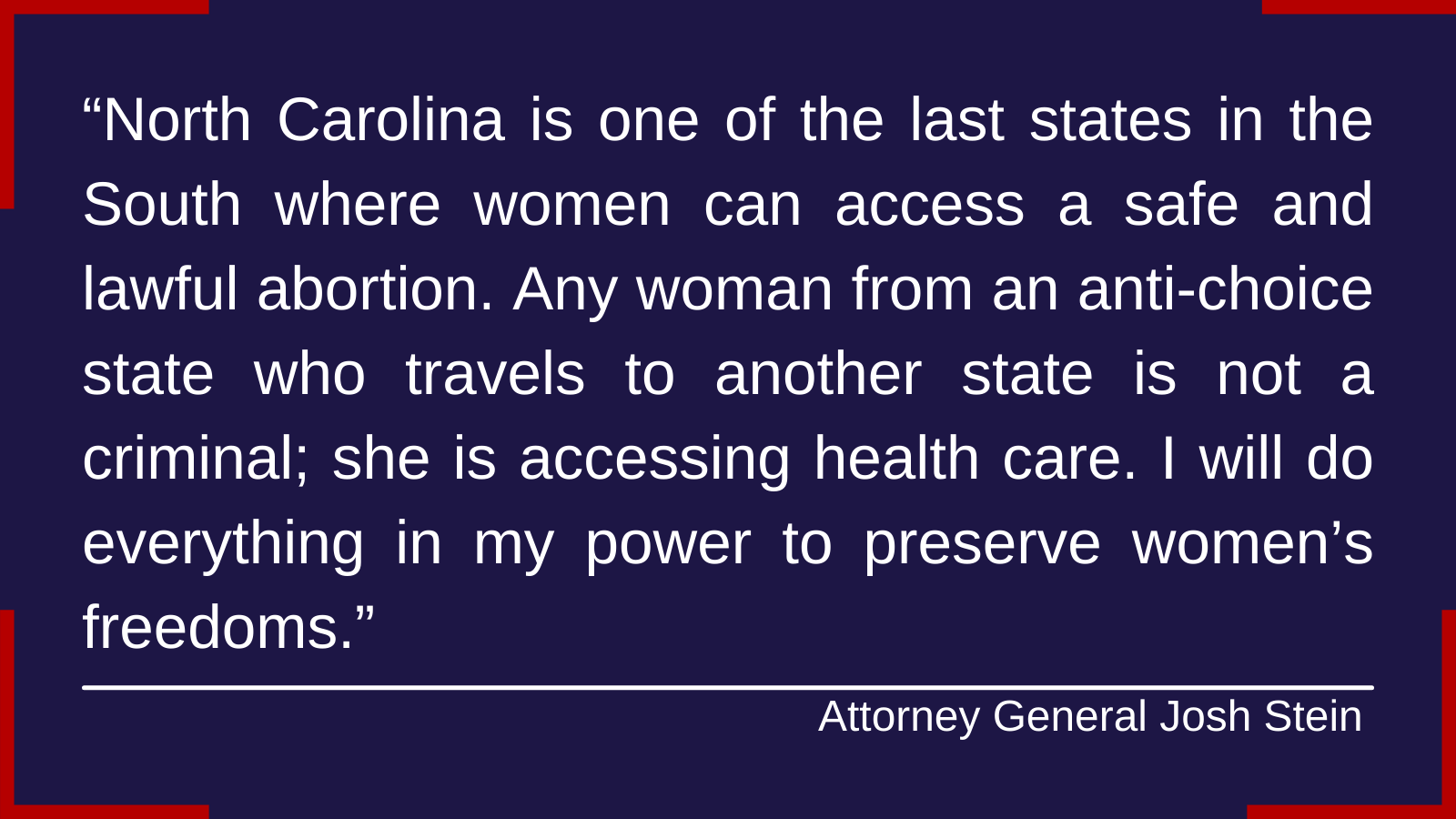 (RALEIGH) Attorney General Josh Stein today joined a multistate coalition of 21 attorneys general, in submitting an amicus brief in Fund Texas Choice v. Paxton to protect women’s right to travel out of Texas to obtain an abortion. The multistate amicus brief was submitted in support of a motion for preliminary injunction filed by reproductive rights advocates seeking to halt enforcement of several Texas anti-abortion laws. In the amicus brief, the coalition argues that Texas residents as well as coalition state residents temporarily in Texas for school, work, or vacation, have the right to travel to pro-reproductive freedom states to access legal abortions.

“North Carolina is one of the last states in the South where women can access a safe and lawful abortion,” said Attorney General Josh Stein. “Any woman from an anti-choice state who travels to another state is not a criminal; she is accessing health care. I will do everything in my power to preserve women’s freedoms.”

In the amicus brief, the coalition asserts that an individual’s constitutional right to interstate travel is at risk due to Texas’ anti-abortion laws, and that interference with that right poses a substantial threat to the liberty and safety of those individuals, some who may need to exit Texas under urgent circumstances. Texas’ anti-abortion laws not only deprive Texas residents from access to the reproductive care they need within Texas borders, but Texas lawmakers have indicated that they are also seeking to impede an individual’s ability to travel across state lines to obtain an abortion, to provide an abortion, or to support a patient in need of an abortion.

The coalition states argue that intruding on the right to interstate travel, including for abortion, is unlawful, even if Texas may be able to regulate abortion access within its borders. The coalition states have a strong interest in preserving the right to interstate travel. Thousands of the coalition states’ residents live in Texas to attend college, go to graduate school, or serve as temporary workers; millions of others enter Texas as visitors each year. The coalition has a significant interest in ensuring that those residents may leave Texas and return to their home state to access time-sensitive, lawful, and safe medical care, including abortions.

The coalition also has a strong interest in preserving Texas providers’ right to travel to coalition states to provide abortion services or to accompany a patient in need of abortion care. As states that are committed to protecting access to reproductive healthcare, coalition states have a profound interest in preserving the right to travel for the millions of individuals living in states with restrictive abortion laws and for whom travel to seek abortions is critical. Texas’s anti-abortion laws—and Texas lawmakers’ threats to use those laws to restrict travel outside their state borders—pose a substantial threat to the liberty and safety of those individuals who may need to exit Texas to seek time-sensitive reproductive care.

A copy of the amicus brief is available here.